Auto Biography: Pucino Family In It For The Long Haul

Home » News » Auto Biography: Pucino Family In It For The Long Haul
Previous

Auto Biography: Pucino Family In It For The Long Haul 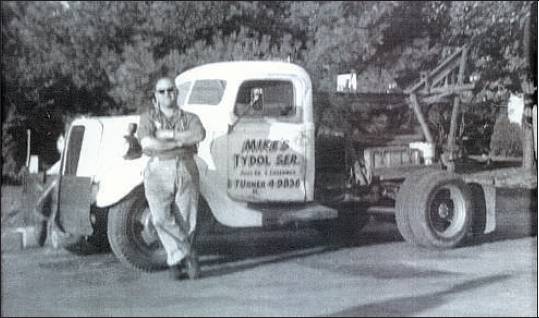 Mike Pucino Sr. with the 1937 Ford truck in its original condition

SOUTH KINGSTOWN — It was a long time coming, but with a 75th anniversary to celebrate the Pucino brothers decided the time had come to honor their late father and restore the 1937 Ford tow truck that had started the family business.

In 1939, Mike Pucino Sr. opened an auto repair shop on Post Road in East Greenwich. He made the move with help from his father, Luigi, partly because the family chicken farm had been wiped out by the Hurricane of 1938, according to Mike’s oldest son, Lou Pucino.

“They needed to get into something right away,” said his brother Mike Pucino Jr.

At the time, it was the main road along the East Coast and not even paved. “Dirt then concrete then tar,” said Lou, noting there were only a handful of gas stations in the area in the early 1950s. “(The area) was not very populated,” said Mike Jr.

When Mike Sr. went off to serve in World War II, his father kept the business going while working to rebuild the farm. When Mike returned in 1944, he bought the 1 1/2-ton truck a year later and fabricated the towing apparatus that has lasted to this day. Using a torch, he welded together a well-thought-out construct of railroad ties, steel piping, sheet metal and slabs of thick steel to create a rig that never failed in some 40 years of service.

“This truck can tow anything,” said Mike Jr. “With a set of chains it can go through anything. It does not have the power to spin the wheels.” Lou noted that it had towed more than 50 cars from the streets during the 1978 blizzard. “It ran steady day and night,” he said.

Mike Sr. continued to operate his towing and repair shop that also sold gas under Getty’s Tydol Flying A brand through the 1950s and 1960s. Around 1970, his sons — Lou, Mike Jr., Joe and Anthony — started to get into the repair business, first as Lou Pucino Engineering and a few years later as Pucino Bros. With Lou at the helm, the tow truck fleet increased to 14 trucks.

In 1981, Mike Jr. opened an auto body shop on Kersey Road in Wakefield, which his son Ronnie and daughters Julie and Wendy today run as Advanced Auto Body. “It was tiny back then,” said Mike Jr. during a recent interview in the decorated break room at the shop. “Just four or five bays.” Today the shop boasts 35 bays, 12 alignment machines, four frame machines and two painting booths, according to his son Ronnie. 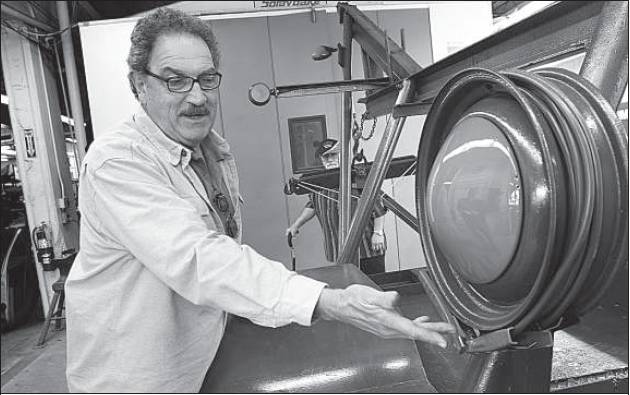 Mike Pucino Jr., who opened an auto body shop on Kersey Road in Wakefield in 1981, which his son Ronnie and daughters Julie and Wendy today run as Advanced Auto Body.

Meanwhile, the 1937 Ford tow truck fell out of service around 1984 and sat outside in the back of Lou’s lot for about 25 years. “I’ve got a lot of property,” said Lou, who has retired. “But we can’t remember why we stored it. We had talked about restoring but we were always too busy.”

But with the 75th anniversary of the family business looming, the family decided in 2011 to haul it down to Advanced Auto Body and restore it in homage to Mike Sr. and the family. “Lou kept the truck and kept the heritage,” said Mike Jr.

“It was in rough shape,” he said. But he was joined by son Ronnie and trusty longtime employees Shannon Carter and Keith Greene, and the team completely restored the front of the truck, to the extent of replacing the engine, which he said was “junk,” with a 1953 Ford Flathead V8, while keeping the original transmission. “It has about 100 horsepower,” he said, adding that they exchanged the alternator with a generator and the belt-driven fan with an electric one to make driving easier in today’s traffic. 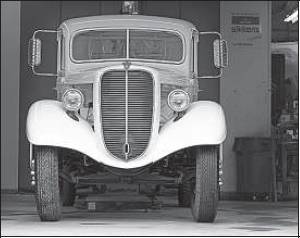 Front view of the The tow truck that Mike Pucino Sr. drove when he operated an auto repair shop on Post Road in East Greenwich in 1939.

With the sides of the hood left open and pinstriping, the truck has a streetrod look, which he likes. “It’s street rodded a little bit,” he said. “We did what we wanted.” The cab is painted Wimbledon White and Hunter Green with flashes of deep red. The sides identify it as “Mike Pucino’s Tydol Flying A Service” in painted lettering, and the old location, “Post Rd, E. Greenwich, R.I.”

However, they left the rear and their grandfather’s remarkable handiwork intact, just cleaning it up, making the winch operable

— originally a hand crank, but later machine driven — and painting it all Hunter Green. A small detail — a Volkswagen wheel welded to the frame with a red hubcap with jumper cables wound round it. “Need to jump a car? (the cables) are right there,” said Mike Jr.

The truck will now be stored inside as a beloved family heirloom, according to Lou. “From this one little truck, (the business has) grown to this auto repair shop,” Mike Jr. said. “My family still is making a living from what my father started.” pelswort@providencejournal.com